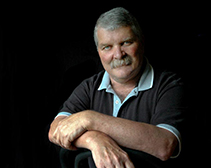 When a workplace accident in 1966 ended my marching career with the LaSalle Academy Band, it was decided that “he can take pictures of us” and a new career was born.  I had two months to learn how to photograph a marching band while on crutches.  (I was on crutches, not the band).   So I grabbed my Dad’s Argus C-Forty-Four Rangefinder and asked questions of anyone I deemed photographically knowledgeable in the hopes that the resulting photographs would not be a total embarrassment to myself, the band or generations of future Emersons.  Actually they weren’t half bad, and I was introduced to that amazing and addictive power photographers have: the ability to freeze time and look at it later.

I continued to freeze time through college, buying my first Nikon F and starting, in 1970, to take assignments from the Narragansett (RI) Times and the North Kingstown Standard-Times, eventually winning Photographer of the Year honors from the New England Press Association.  In 1973, a call from The Providence Journal put me in the big leagues of Rhode Island photojournalism and gave me some of the best assignments I have ever enjoyed.  Imagine celebrating the American Bicentennial sitting in the captain’s quarters of a Danish Tall Ship toasting America with Italian champagne, just before departing to join the parade of sail up New York harbor and past the Statue of Liberty.  And getting paid for it.  Political conventions, the America’s Cup races, Blizzard of ’78, assignments for UPI, The Associated Press and The New York Times followed.  As did another Photographer of the Year plaque, this time from the National Press Photographers Association (Region One).

In 1978 I headed south for Miami and a staff position with the Miami News, a paper you’ve never heard of.  But I covered some diverse assignments: the Miami Dolphins, Spring Break in Fort Lauderdale (I still have the scars) and the Daytona 500.  I had the thrilling adrenaline rush that results from being shot at during the Overtown and Liberty City riots.  But I knew my tenure in Miami would be short when Hurricane David was bearing down for a direct hit on Key West and it was decided that I would go to the Keys to cover the storm because — I’m quoting here — “Being single, you’re expendable.”  As police officials were enforcing a mandatory evacuation from the Keys, imagine the feeling of being the only car heading south on Route 1.  The only car.

I returned to Rhode Island in 1980, packed my Nikons away and decided to try my hand (and my back) at television at WJAR, the NBC affiliate in Providence.  I told myself I would try it out for a little while and see how it went.  That was a lifetime ago.  Back in the old days when TV stations were locally-owned, when product quality was paramount and they actually spent money, we did some pretty amazing stuff.  There was a reason Channel 10 was No. 1 in the market.  I got to do a documentary in Thailand on Cambodian refugees, was assigned to the Investigative Unit for many years and had the chance to meet many fascinating people both famous and not.  Presidents, celebrities, local characters, idiots, friends have all passed through my lenses over the years.  I have two Emmy Awards for a local “60 Minutes”-like show called “Ten Inside” that I produced, photographed and edited.

Still photography entered my life once again with the advance of digital media.  It was now possible to create still images without darkroom access and chemical-stained lab coats.  My Photoshop days began and it was fun again.

Over the years, my work, both stills and video has appeared in various publications and on air, including Time, People, Sports Illustrated, Stern, The New York Times and Yankee Magazine, to name just a few.  Through NBC, some of my video has been shown all over the world, most recently the coverage of local flooding was the lead story on “NBC Nightly News.”   Clients I have worked for include Anheuser-Busch, Brown University, Trinity Repertory Company, Bonham & Butterfields, Serta Mattress and The Community Players.

In 2016, I faced another career change…..after 36 years in broadcast television, I retired from WJAR.  With mixed emotions and a generous serving of fear of the unknown, I closed the door behind me and haven’t heard the alarm go off at 2 a.m. since.  But just because I’m sleeping later doesn’t mean I’m not getting up.  I’m looking forward to getting back into still photography and whatever comes next.

So here I am, face to face with the rest of my life.

It is weird and more than a little unsettling to see your life story on a page or computer screen.  But I have been so unbelievably lucky.  I have had so many opportunities to step behind the yellow caution tape and experience first-hand the events, people, faces, extreme happiness, debilitating sadness and the triumph of human perseverance up close and real personal.  While most people read a newspaper or watch TV for their news, I have spent my entire career meeting the people whose lives those news stories changed or otherwise impacted. I have encountered some extraordinary people on this journey and some real jerks too, who in their own way were extraordinary.  And they know who they are.

I’ve made friends, enemies, money and mistakes, but I think back to that old Argus C-Forty-Four Rangefinder sitting on my Dad’s bureau and how lucky I am that it opened so many doors and enabled so many unforgettable experiences to come my way — experiences that have changed my life.